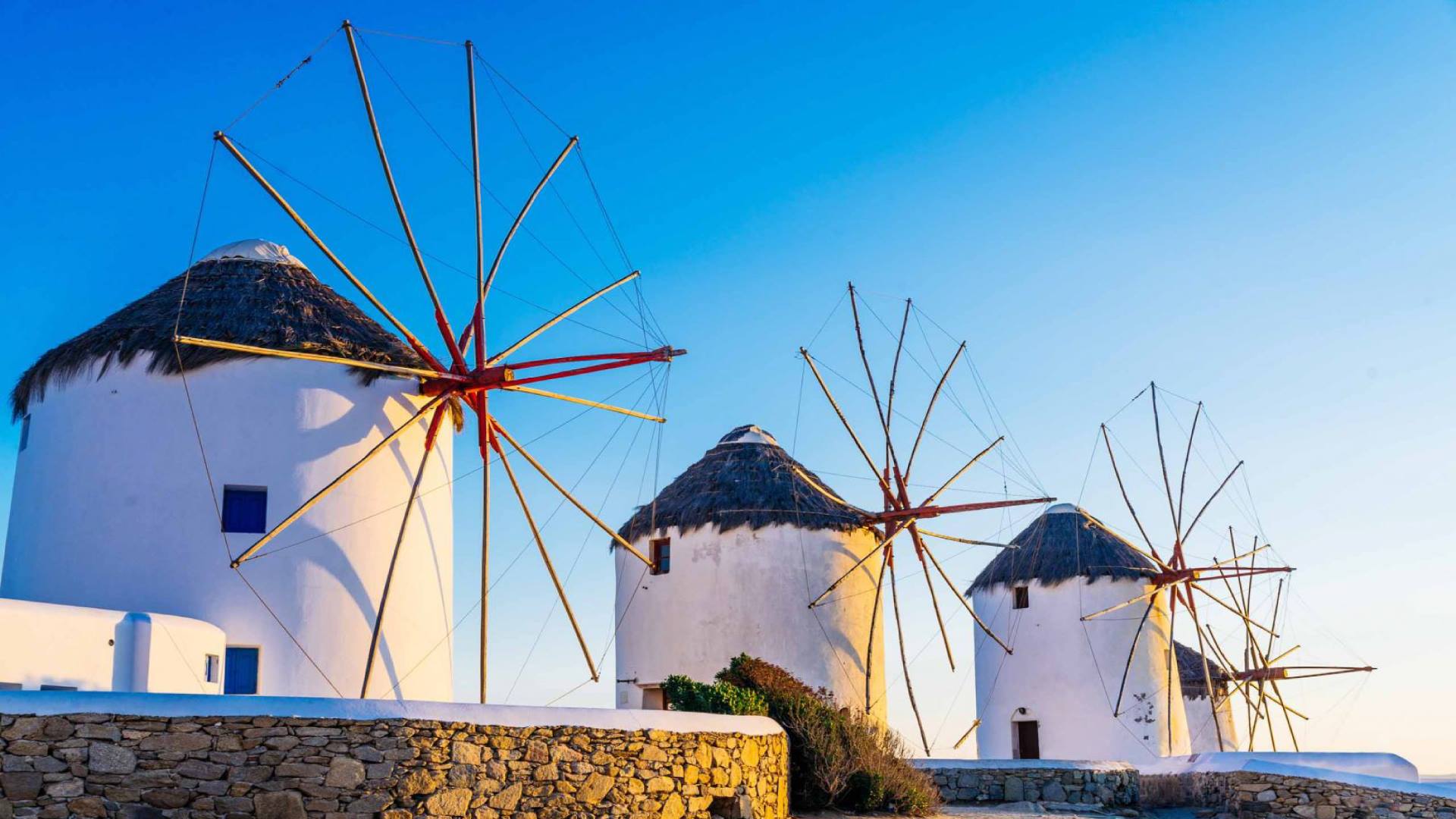 The complex of the Lower Mill, proudly rising above the sea, on the small hill southeast of town. The Down Mills are located in the southeast of town, next to the sea, between the picturesque Alekandra and the district of Niohori and impress every visitor with their imposing white volumes in a row, oriented towards the sea.

Today, seven of the ten (all over the island more than twenty in all) were preserved, which existed here until the early decades of the 20th century and milled with the unending power of the north the native cereals.

Mykonos mills, early manufacturing units, contributed decisively between the 17th and 19th centuries to the island’s economic well-being, providing it with a nut as a necessary station for sailing vessels across the Aegean.

Losing their economic significance as technology evolved after World War I, they became one of the most popular monuments in the Cyclades, and their image, as a “trademark”, traveled far beyond the home. By 1700 the 11-mill complex had already been developed and operating.

Its collection covers all subject areas and the range of human knowledge such as Greek, Foreign and Child Literature, Religion, History, Poetry, Theater, Archeology, Art and more. as well as issues related to Mykonos and the Cyclades and constitute a cultural heritage for the country..

The most important part is the Historical Archive of Mykonos, which contains documents and manuscripts of previous centuries about the history of the island and the Cyclades, rare and valuable publications, photographs and documents with the correspondence of 1821 heroine Manto Mavrogenous. It houses a rich collection of 18th and 19th century photographs and 10,000 volumes. 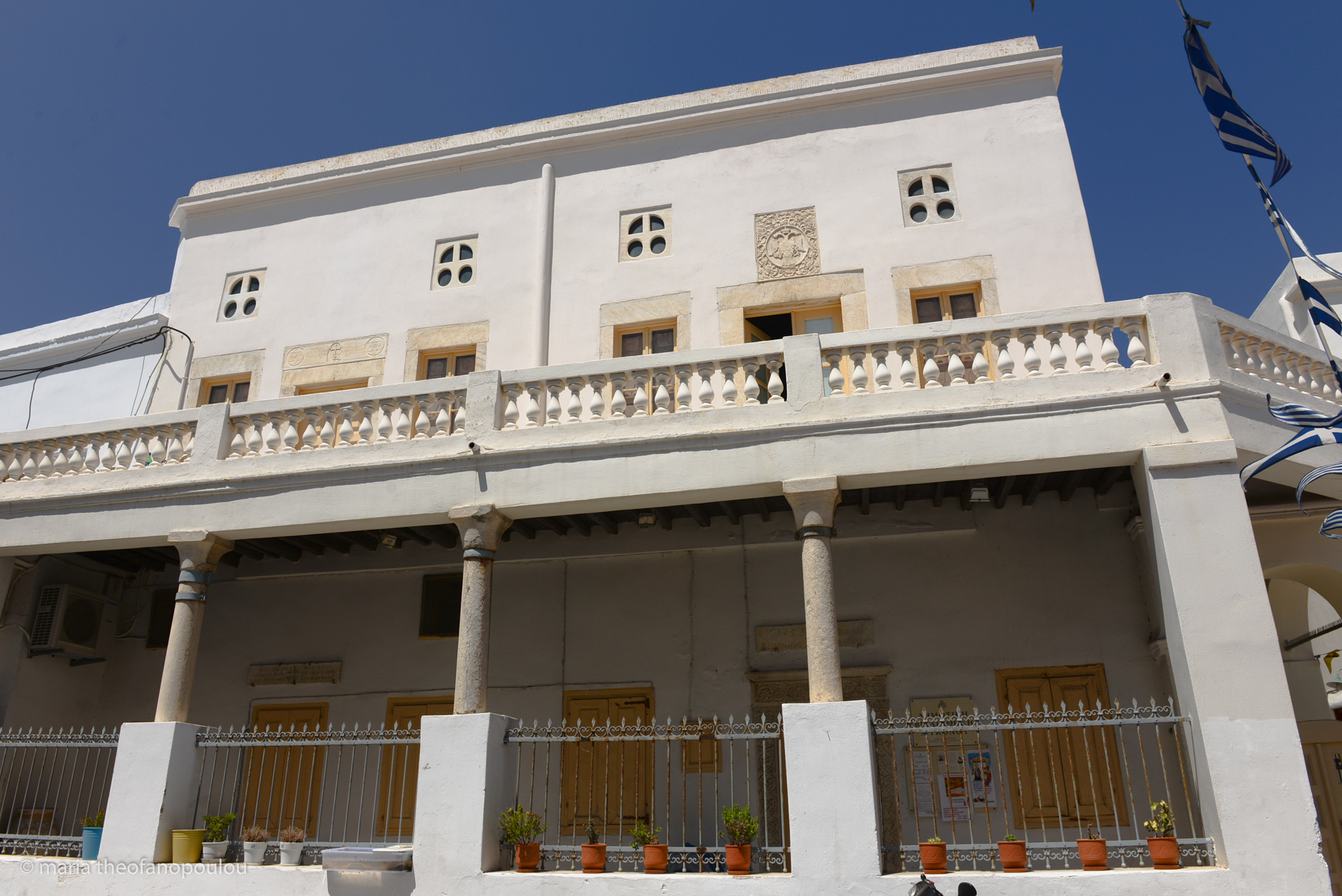 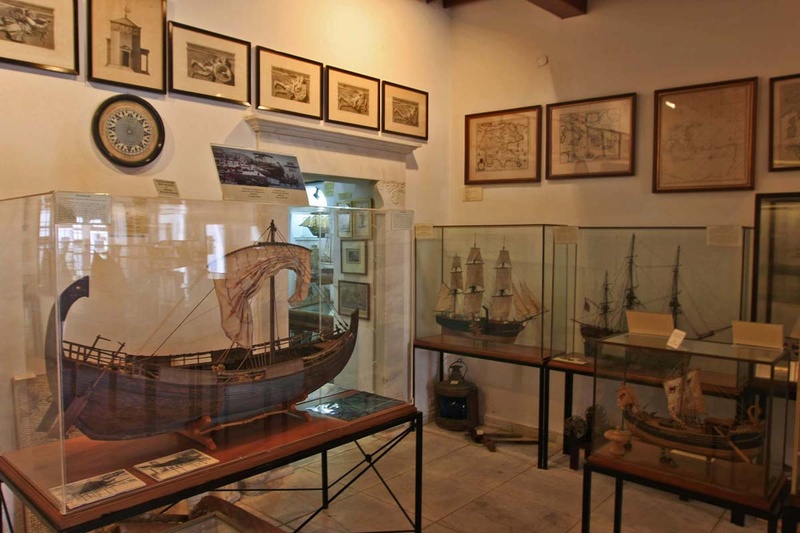 It is housed in a 19th-century captain’s house owned by captain Nikolaos Sourmelis, who greatly aided the Cretan struggle against the Turks.

Founded in 1983 by Mykonos shipowner George Drakopoulos, it has been open to the public since 1985. The exhibits present the history of shipping in the Aegean from antiquity to modern times. They include dummy ships from the pre-Minoan period to the end of the 19th century, maps, engravings, a multitude of coins, amphorae, navigational and navigation instruments and more.

In the garden you will find a collection of replicas of ancient gravestones with sea-inspired themes. Also, the turret with the Armenist lighthouse mechanism.

At the homonymous site in the center of town, these wells mainly provided water from the mid-18th century until the 1950s.

Tradition says that anyone who drinks water from all three wells will never leave Mykonos Island or at least fall in love with it and return one day. 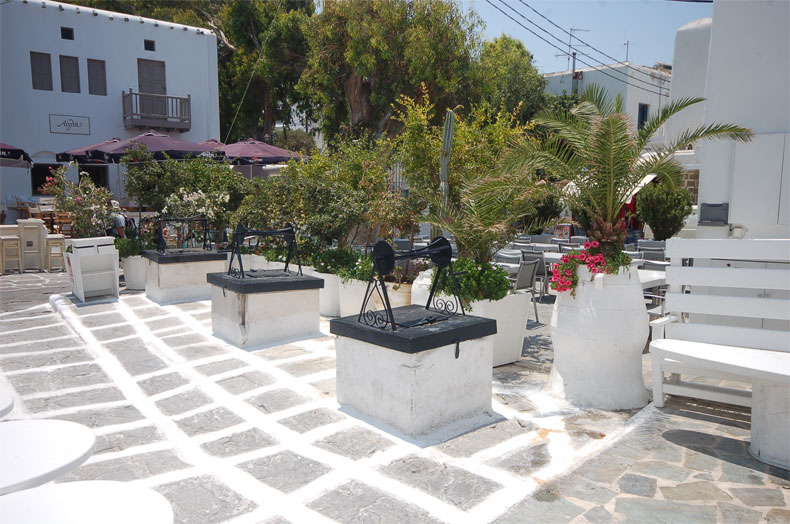 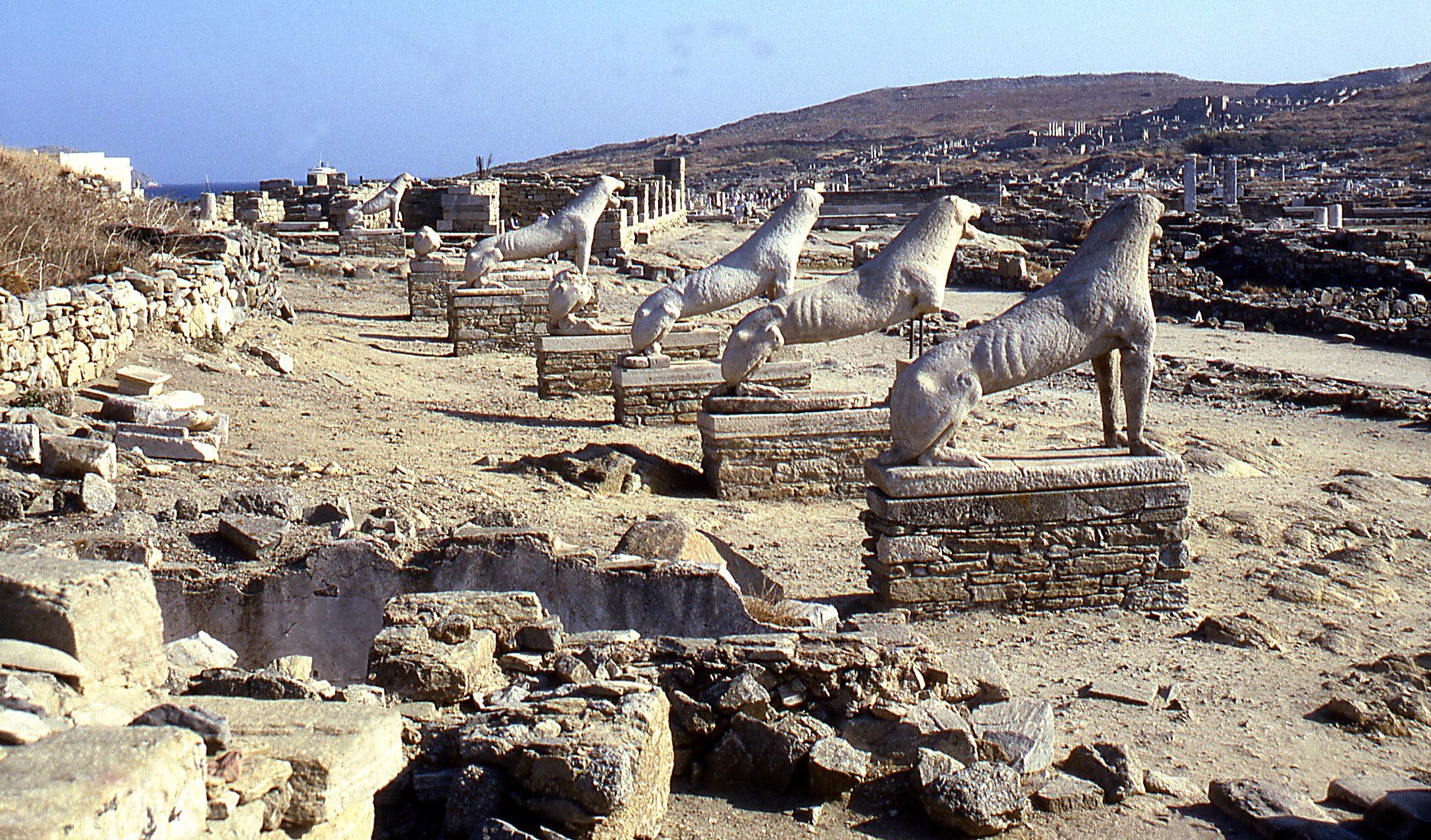 Delos is a small island of the highest archeology between Mykonos, Tinos and Syros. Access to this island is very easy with boats and day trips are constantly organized. Visitors can enter the sacred island only during the day. Delos is under the protection of the Ministry of Culture and staying on the island is prohibited after sunset.

Delos was included in the UNESCO World Heritage Site. On this sacred island, according to mythology, Leto, hunted by the envy of Hera, fled here and gave birth to two gods Apollo and Artemis.

Delos was inhabited since 2500 BC. It was declared independent in 314 BC by the Mycenaean and Ionian conquerors. but it was again annihilated by the Romans, who established it as a very important port, so it flourished financially in the following years. The buildings on the island were magnificent and the temples unique.

The four are on the ground floor and one on the upper floor, which is itself known as the Paraportian church. The four churches at the base are Saint Eustathios, Saints Anargyri, who they are the oldest of all and is said to have been built at the end of the 14th or early 15th century and completed in its present form of 17th century Saint Sozon and Saint Anastasia. The other two monasteries in Ano Mera were the Paleokastro monastery founded in the 18th century and the Panagia Tourliani founded in 1542. 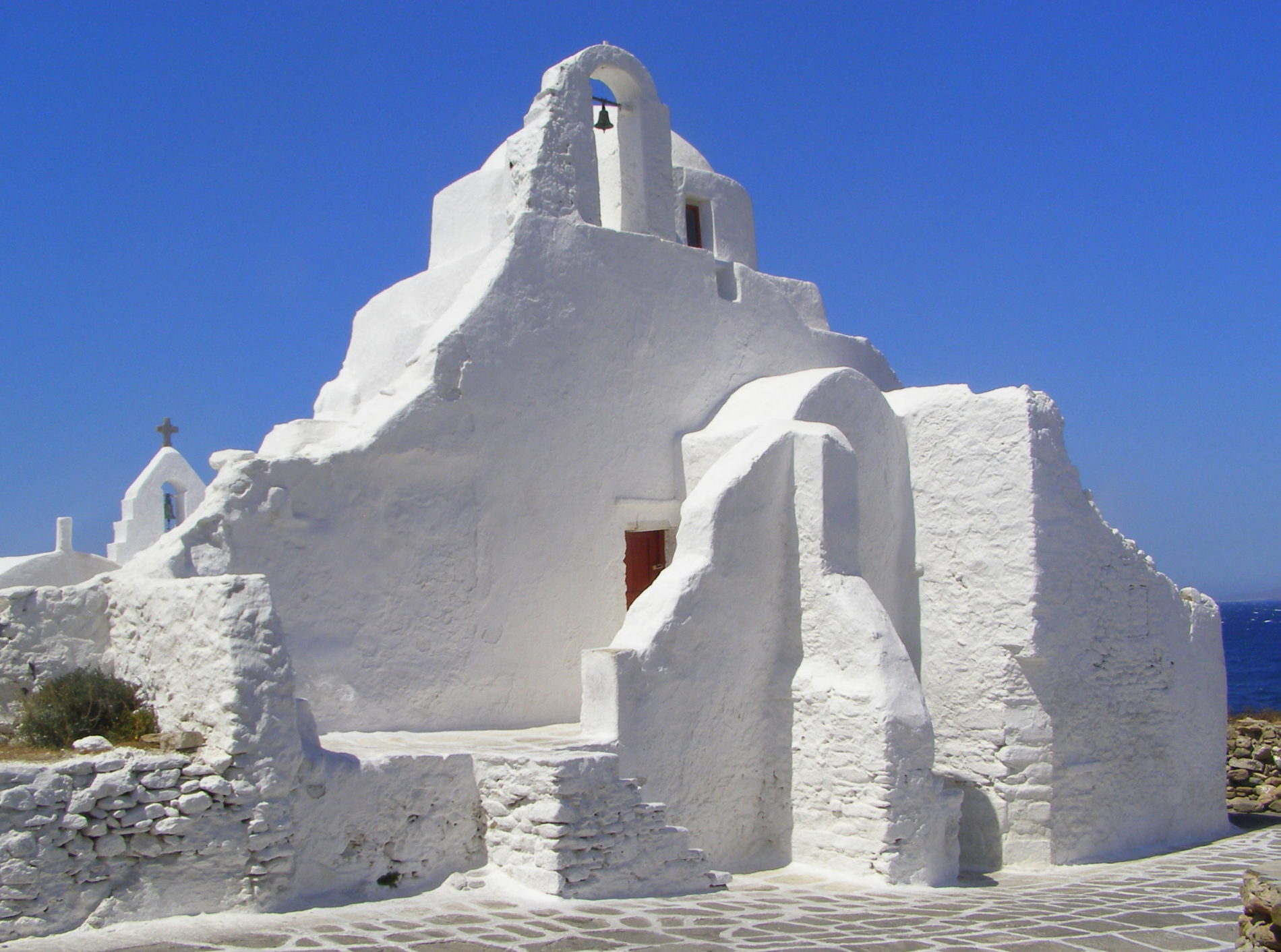 A further branch of the Folklore Museum was named after its last owner, Lena Sxkianou.

Passing inside, you are automatically transported to a typical 19th-century Midwestern dwelling and extract information about the lives of the locals of that period.

Here you will find mirrors, embroidery, paintings and useful or decorative objects in their natural position.

Platis Gialos with its immense golden sand and many facilities, attracts water sports enthusiasts. The beach of Platis Gialos is also great for swimming, sunbathing, rowing, fishing, and much more..

Visitors aren’t going to get bored because there is just so much they can do! Photography is also a common activity on the beach of Square Gialos and the surrounding islands of Mykonos, due to its great natural beauty combined with the glittering sun, sand and sea..

Platis Gialos is a paradise that you will hardly find elsewhere. It is magical how nature mixes golden sand with beautiful sea. Drink your coffee and relax. You can reach here by car or boat to famous beaches such as Super Paradise and Paradise to enjoy an endless beach party. One step from Platis Gialos beach is the departure point of the ships that operate as sea. taxis and transport visitors to almost all the beaches of Mykonos.. 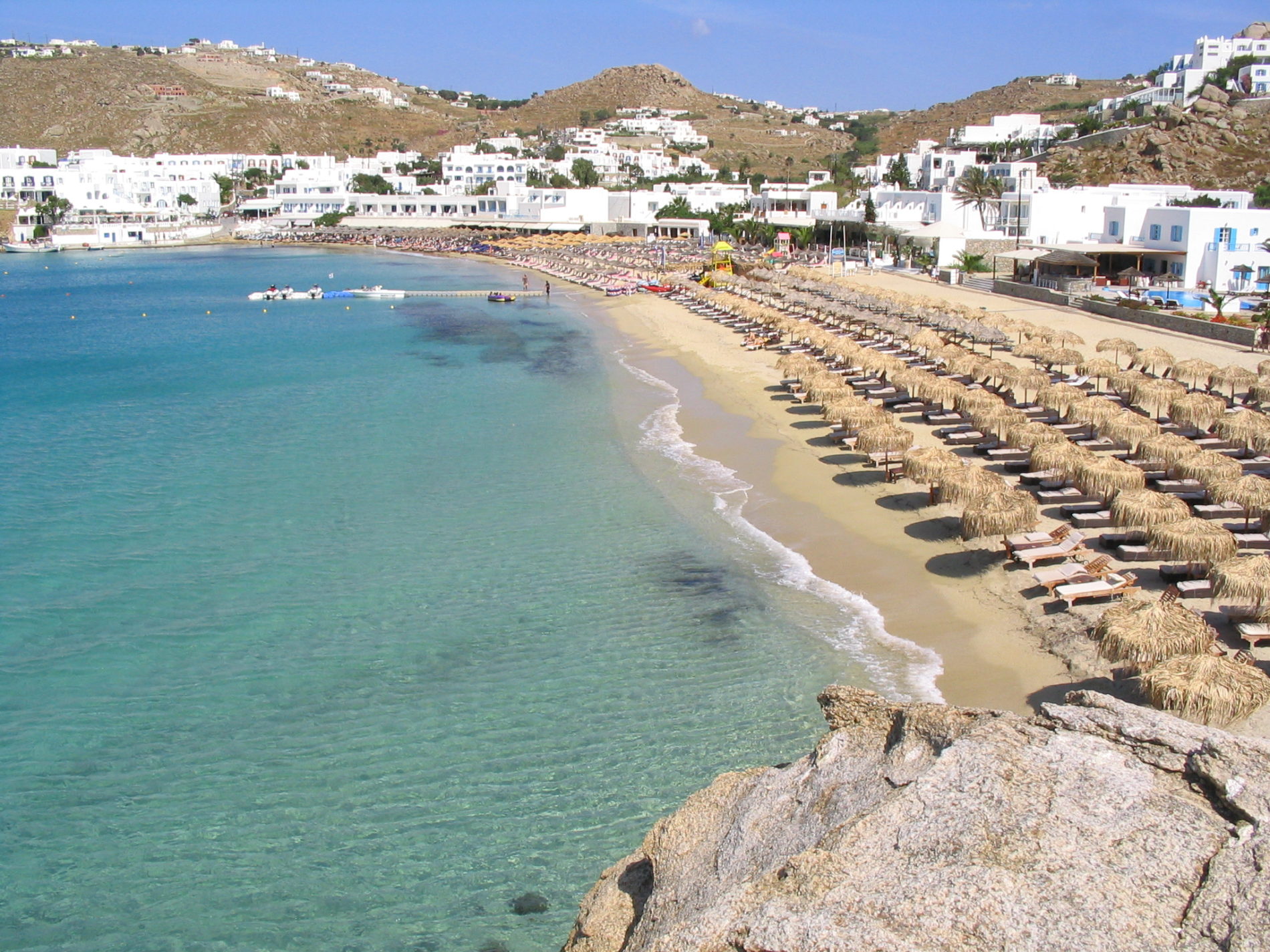 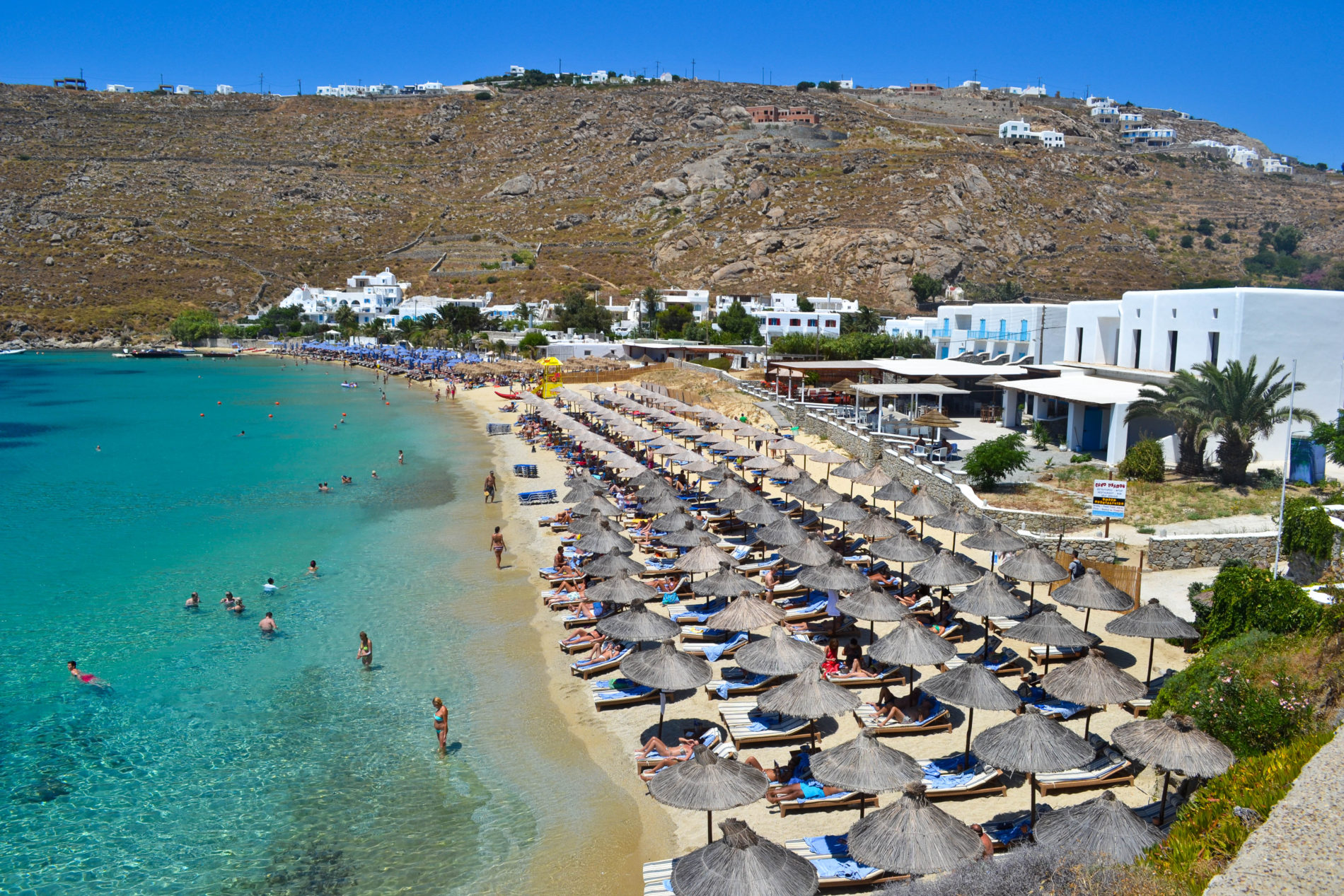 The secular beach of Psarou.

Psarou is one of the most popular beaches of Mykonos, just 4.5 km from town. Beautiful, sandy beach that is visited by thousands of tourists and celebrities every year. Very well organized with umbrellas, wooden sun beds, impeccable service and service. Due to its popularity, there is a waiting list during high season.

Champagne and dozens of sparklers illuminate the sky whenever there is a party. Sports, lifeguard and easy access.

We use cookies to provide you with the best experience on our site.

This website uses cookies so that we can provide you with the best user experience possible. Cookie information is stored in your browser and performs functions such as recognising you when you return to our website and helping our team to understand which sections of the website you find most interesting and useful.

Strictly Necessary Cookie should be enabled at all times so that we can save your preferences for cookie settings.

If you disable this cookie, we will not be able to save your preferences. This means that every time you visit this website you will need to enable or disable cookies again.